My visit to Bosnia and Herzegovina 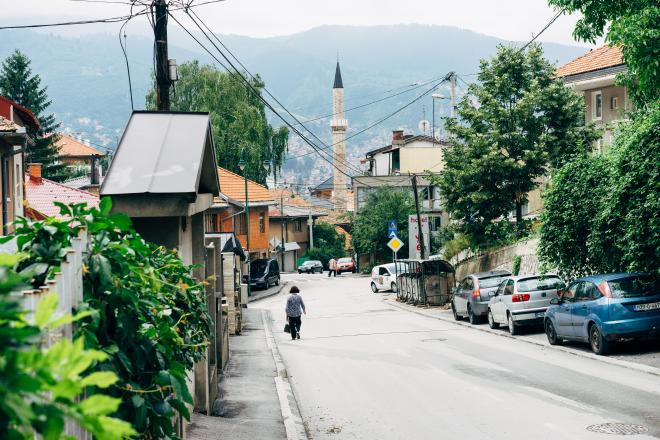 Ten days ago, I paid a visit to Bosnia and Herzegovina, together with my S&D colleague Dietmar Köster. As the Greens/EFA spokesperson on Bosnia and Herzegovina, I wanted to visit the country to assess the deep political crisis which it is currently facing. I hoped to speak to the various actors involved to learn how they see the current crisis, actors who often feel overlooked by the international community, like opposition parties and NGOs, but also official institutions. In BiH, I hoped to gain their insights on strategies for the country to solve the current political crisis and depart from a system based on segregation and electoral discrimination, and to instead find the path towards an integrated and truly democratic country.

For years now, the ethno-nationalistic political leader of the Republika Srpska (RS), Milorad Dodik, has been playing dangerous games, challenging the territorial integrity of BiH and threatening to dismantle the Dayton structure. He has prepared legislation to unconstitutionally and unilaterally withdraw competences from the state-level in crucial areas and does not recognise decisions taken by state-level courts or by the High Representative for Bosnia (OHR). This supervisory system was meant to be temporary, but the lack of progress due to corrupt ethno-nationalistic politicians with other interests, made the Dayton Agreement last year celebrate its 25 years anniversary, without any meaningful constitutional changes since its instalment 25 years ago.

In July, the situation escalated after the OHR introduced a law that criminalised denial of the genocide that has taken place in Srebrenica. Dodik used this legitimate decision to discredit the OHR even further, to install a full-blown boycott of state-level institutions and to prepare steps to illegitimately transfer vital state competences (medical services, army, tax and judiciary) to the level of the Republika Srpska. These announcements, that would de facto dismantle Bosnia and Herzegovina as we currently know it, followed by paramilitary police exercises near Sarajevo and nationalistic rhetoric, has created an atmosphere of crisis in the country. As the traumas of the nineties are still open wounds for many, fear for another war is easy to trigger.

Citizens count on the international community to support and protect them, it is the promise that we made to them under Dayton. Its response came too late, and is far from satisfactory. Representatives of the EU and US have been sent to BiH to negotiate with the three self-proclaimed ethnic leaders, including Mr Dodik. Official institutions, NGO’s, opposition parties and even two of the legitimate Presidents of BiH are bypassed and do not have a seat at the negotiation table. The aim is to calm down Dodik, by giving in to demands of the three negotiating parties, in exchange for a suspension of the foreseen votes on competences in the Republika Srpska National Assembly.

Many criticize the EU and US for making a deal which cements ethnic division and undermines any attempt of an inclusive process with legitimate institutions, all political parties, NGOs and individual citizens. Their preference for a quick fix moves the country even further away from a sustainable future.

Instead of negotiating with the corrupt politicians that are at the cause of the current political crisis and have no interest whatsoever in a democratic BiH, the  international community should draw a clear line and firmly react to Dodik’s direct violations of Dayton, as is our historical responsibility. Like the US, the EU should impose targeted sanctions on him and the persons and companies that accommodate him. Should he continue with his secessionist agenda, further financial sanctions towards Republika Srpska should be considered, in order to preserve the territorial integrity of BiH. The Foreign Affairs Council of last week failed to do so, due to a lack of support among Member States. After this disappointing result, a coalition of willing Member States should push to convince their counterparts in the coming weeks, or otherwise bilaterally impose these sanctions.

In the meantime, the citizens of Bosnia and Herzegovina should be able to vote on the future of their country, in free, transparent and fair elections. For that to happen, technical changes are needed to the election law before the elections of next year. Not based on proposals by politicians who want to secure their interest, but by objective institutions like the Central Election Commission. After the elections, the international community should facilitate and ensure a fully inclusive process towards real democratisation of the country, implementing the necessary changes to the constitution and election law. This process should result in a system where every citizen can be elected and can feel represented.

During my visit, I met with Mrs. Azra Zornic and Mr. Jakop Finci, who achieved ground-breaking verdicts at the European Court for Human Rights (ECtHR) already years ago, successfully defending their right to stand for elections without identifying with one of the three main ethnic groups. They are convinced that a quick constitutional reform as result of a bargain between the leaders of the three self-proclaimed ethnical leaders, will not eliminate the discriminatory electoral system, and may even obstruct a real reform in the future.

It is still not too late to change course, but we should not waste any more time with finding solutions through people who are the problem, by which we will only cement the ethnically divided structures. Take away power from Dodik instead of empowering him, redirect the attention and consultation to the citizens and legitimate state institutions. Only in a secure and democratic country, free from hate speech and corruption, different groups can learn to live and work together. This allows them to work on solutions for the real problems people are facing, like unemployment, economic regression, emigration and environmental problems. Like everyone, Bosnian people have the right to determine and safeguard their future and to enjoy their great country.

The war and genocide in the nineties, but also the complex Dayton Agreement has mandated the international community with a special responsibility. It is now high time that we fulfil this responsibility and help Bosnia and Herzegovina achieve the truly democratic future that its citizens deserve.